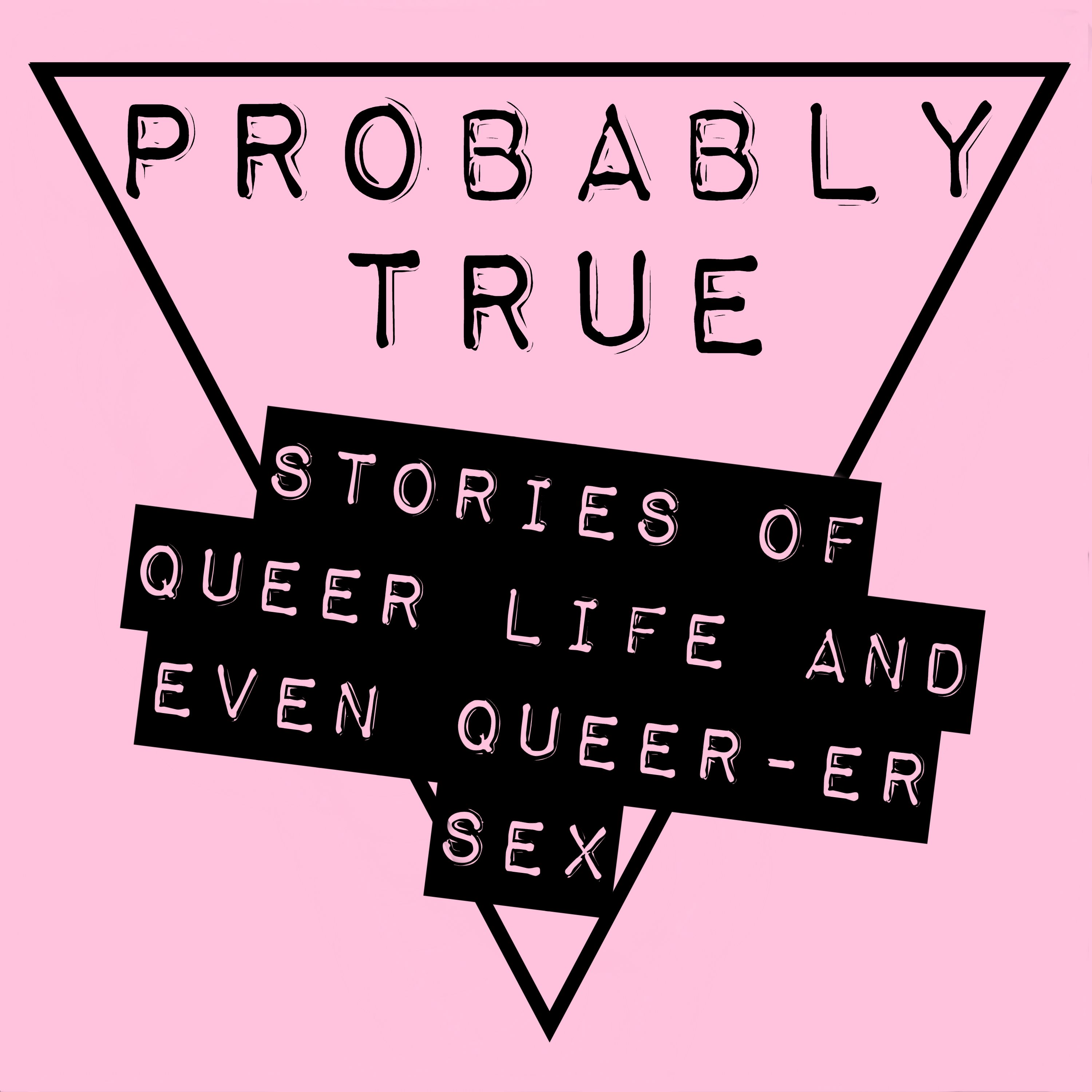 The postman sends me off on a bit of an existential spiral, there's stuff coming at my head, and I've got a wizard in my pants. Another normal week in lockdown.

The postman sent me off on a bit of an existential spiral, there's stuff coming at my head, and I've got a wizard in my pants. Another normal week in lockdown. A wonky look at the basics of code-switching, the secret signals we all give off, and a visit from my granddad, who died many years ago.

Support the show on Patreon: Patreon.com/ProbablyTrue

Transcripts, submit a story, and all things Probably True: ProbablyTruePodcast.com

I noticed something recently. Apart from more grey pubes coming through. I mean, it’s a little damaging to the ego to see the odd grey hair on your head coming through, or a couple turning up in your beard that can’t easily be explained away by last night’s ice cream binge.

But at least you think “oh well, that’s cool, I’ll look distinguished and silver fox-y” and I don’t like the word ‘daddy’, but generally there’s more space opening up in gay culture for those of us ageing beyond twink, so I guess it’s not TOO bad…” and then you look down and you see winter is creeping into your Secret Garden.

There’s a fucking momento mori for you - your crotch has apparently decided to cosplay as Gandalf. Maybe I should get a little robe and stick on a beard so I can shout NONE SHALL PASS every time I get an erection. Actually, there’s no maybe on that. I am DEFINITELY going to make a little robe and beard for my Gandalf-penis. Lockdown is boring, and there’s sod-all else to do.

Although “none shall pass” is a bit of a stretch. I suppose it’s pithier than “Most shall pass, depending on how I’m feeling and what’s on Netflix and how long it’s been since I had a wank”. Can’t imagine Gandalf shouting that, to be honest.

Anyway. That’s an arts and crafts project for tomorrow, not what I realised.

As I was looking at my penis and thinking about the fleeting nature of youth, the inevitability of death and inherent decay of all things, the doorbell went. It was a relief, to be honest. Well, no, it was the postman. But THAT was a relief.

He had a parcel for me. I got it off him and as I went back inside, I realised that, without even thinking about it, I'd switched into ‘dude’ mode to answer the door. I was all like “Alright mate? Parcel yeah? Cheers, thanks.” and then immediately after closing the door I was back to listening to Kylie’s latest album (praise Kylie, bringer of light and joy), because it’s basically how I pray.

Anyway, I started thinking about why I did my “hur, big burly masc” voice.

Would it have made any difference if I’d answered the door and been all “Oh hey there. That’s a big package, is it for me? Oh, I”m going to need both hands for that, how will I manage…”

Ok, maybe not like that. Unless he’s really hot. And I’d been possessed by Blanche from the Golden Girls.

It happened again, a week or so later, as my landlady decided that we needed a new kitchen. Fair enough, as the one we had was about 20 years old and falling apart. The oven didn’t work, the drawers were all purely for decoration, as they either didn’t open or came away in your hand, and you had to know where to stand when you opened one of the cupboards, or the door would land on your foot. None of this really mattered to me as I live off a strict diet of microwave meals and biscuits, but I could definitely see the appeal in a kitchen that actually worked, rather than one that was just theoretical.

So, anyway. New kitchen. It arrived along with some big burly men who were going to fit it. Which was lovely, but again, I found myself letting them in and being like “Alright mate? Yeah, I’ll put the kettle on uhhh tits waaaay ladsladslads” which is how straight people talk. I know, because I did the gay version of Duolingo. It’s called Analingo.

Anyway. I found that whenever I talked to them, it was in my ‘bit more macho’ voice. Which wasn’t necessary, as they’re in my house, and since they started work every day at the frankly ridiculously early hour of 11am, they’d seen me try and make a coffee in my fluffy nightie and with my hair in curlers, so it’s not like I was convincing anyone, but still, I stood with my legs a bit further apart, talked a bit lower, and generally got a bit more blokey.

It did make me wonder, why do I, an out and extremely proud person, go all ‘straight guy masc’ at people I don’t know?

Turns out it’s this thing called ‘code switching’. Since humans are social animals, we give off a lot of clues and non-verbal signals about what group we’re in and where we fit in the social order of things. The way we walk, and talk and stand, and hold ourselves, as well as what we were and how we wear it all play parts in this. It’s all very big and complicated, but it’s definitely one of the things that we become attuned to very early on in life.

But then, I’m from a rather rough mining community in Yorkshire, a place where emotions of any kind was “being soft”; where no-one puts the heating on between February and November, despite the fact that we’re technically further north than Moscow; and where, as my Grandad used to tell me, “We weren’t frit of hard work when we were young. At 15 you finished your exams and that were it. You’d leave school on’t Friday, and ‘av a job down’t pit on’t Monday.”

And somehow, out of all of that, came ME.

I have no idea either, to be honest.

Anyway. I grew up among all that macho swagger and talking low, and walking with your legs wide, so everyone knew you needed extra space for your big swinging balls, and all that malarkey. So, on some level or other, I learned that that’s how you stay safe. You ‘straighten up’, use the same coding in your behaviour and speech as everyone else, because if you don’t, there’s a good chance of a swift kicking.

Of course, I moved away and found a world where I could be myself, and act and speak however I wanted, but something of it sticks, y’know. There’s a reflexive “oh, strangers! Quick! BLOKE” response from somewhere deep in my brain.

It’s weird, especially as I thought, to begin with, that it might be rooted in some kind of shame, but it’s not shame, which is a relief. Just a desire to blend in, at least briefly. Because standing out can get you noticed, which is fun on a dancefloor in some sweaty East London queer bar, but less so on the streets of a rough mining town, or whatever.

It’s like part of my brain decides to broadcast “I’m just like you - Nothing to see here” by immediately turning the Straight dial up to ten. Then, as I get to know these new people, my brain relaxes a bit and I can, hopefully, turn the dial back down to the point where I can cock my hip and flirt a bit and generally find out if they’re down to get noshed off on the sly.

And you might be listening to me saying this, thinking “Butt Scott, you bronzed adonis, why would you need to do that in the first place?” and if you did think that, then you’ve given yourself away, ya filthy breeder. Because what you’re doing is showing that you never had to worry about getting a kicking for no other reason than being noticeably different. Not really a problem now, but more so in those formative yearsd, and that stuff sticks.

It’s like the stereotype of gay people walking fast? Well, yeah, we do. We’ve got stuff to do and places to go and all these dicks aren’t going to suck themselves… But also, when you’re happily walking down the street, not paying attention to how you’re acting, and something whizzes happily past your head, thrown from a moving car. That’s when you start to develop your dickhead radar. It’s always running in the background, your dickhead radar, so you get this feeling that you should cross the street before that guy down there gets any closer, or you’re in a pub somewhere and the vibe isn’t quite right and you can’t put your finger on why, but you know you probably shouldn’t stay too long. That’s your dickhead radar. And, luckily, nowadays, 9 times out of 10 it’s being overcautious and there’s no problem at all, but it’s still good to have.

The thing about code switching, though, is that when we know we’re in safe spaces, or around people we don’t have to guard ourselves against, we can let all that go, and relax into being ourselves. At least, that’s the idea. I think a lot of us have a sort of existential thing in our teenage years where we don’t know which of these differently-coded behaviours is the ‘real’ one. “Oh! Who is the real me?” moment when you want to paint your bedroom black, grow a stupid fringe and not do your maths homework.

If you are struggling with working out who the ‘real’ person under all these masks and different codings is, think about what kind of person you are when we’re alone, and there’s no-one watching you. That’s when you can get rid of it all and just be yourself.

In my case, that’s someone who, eats too many biscuits, and has started making little costumes for his nob to dress up in.